skip to main | skip to sidebar

We have returned from an excellent month in England and Wales. All will be normal again in the gallery after September 1st. We currently are showing Robert Burke's excellent acrylics see below. Robert's show will be followed by Kris Kann's retrospective photography show opening Friday September 24. Following Kris will be the Return of the Swans Festival group photo show in late October and then a group showing of 3 photographers and their unique styles. More on this later. 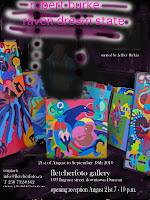 Yellowknife and Fort Smith and future exhibits at Victoria's Winchester gallery this fall and next year at the Helsinki cultural centre in Finland. Robert's hallucinatory style seems eerily familiar his iconography being loaded with

archetypal images yet the work is not derivative of any other contemporary aboriginal artist and forges its own territory in the genre. This exhibition is guest curated by Jeffrey Birkin.

Posted by fletcherfoto at 7:48 AM